The robot teetered dangerously at the edge of the cliff, and the investigators looked on with apprehension. “I feel like we should maybe do something about that,” Speedy said hesitantly.

“Such as?” Straws asked, raising a singular, condescending eyebrow. The eyebrow looked down at Speedy. And judged.

“We could re-enable it and drive it away from the cliff. Or just, I dunno, tie a rope around it or something.”

“We can’t reactivate the robot post-match, or tether it to anything,” Speedy pointed out.

Just then, the edge of the cliff gave way and sent the robot tumbling down the ravine in a shower of rocks, crushing the group of supporting characters lingering innocently below. Rest in peace, guy who got charged with littering, Dave, Will, the judge, the defendant, the prosecutor, the head of the police department, and Taylor Swift.

“Hmm,” the referee said, scratching his wise, all-knowing chin. “I feel like maybe that was preventable. Perhaps a revision is in order.”

The heavens opened up and a beam of holy light shone down upon this revered dispenser of sage advice. A choir of angels descended from the clouds, swathed in white and carrying golden lyres, and with one heavenly voice, sang:

The referee nodded thoughtfully. “Yes, I thought you might agree.

The robot can’t be enabled post-match, nor can teams tether to it,except in exceptional** circumstances (eg. during timeouts, after Opening Ceremonies, etc.) and with express permission from the FTA or a Referee.” 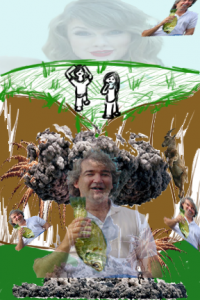